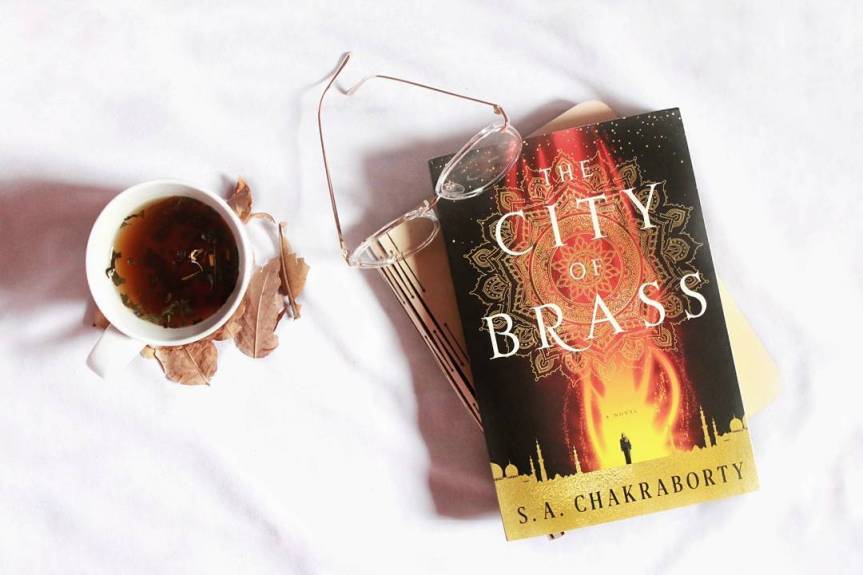 The City of Brass is hands down my favorite book of 2017 and has become my new favorite series!

When I was younger I was so captivated by the world of Djinn, thanks to Bartimaeus Trilogy and The Children of the Lamp series. And when I found out that this book is a Young Adult book about Djinn I was sold right away!

The story follows Nahri, a con woman with the ability of healing people. Many believes that Nahri’s work has something to do with spirits, but Nahri didn’t believe in magic, or spirits. Until she performed a fake exorcism called Zar and accidentally awaken an evil Djinn who possessed a little girl. While running for dear life, she also accidentally called for Dara, a Daeva warrior who promised her safety in a magical city of Daevabad. Together, they began their journey to the city of brass.

Ali, a humble and kind-hearted Djinn who’s also the second prince of Daevabad. He secretly helps to run a small organization to help Shafit (half human half Djinn) against his faher’s authorization.

The book is alternating between Nahri’s and Ali’s point of view. While we get the informations about the Djinn’s world, tribes, histories from Dara in Nahri’s chapter, we get to ‘see’ the real Daevabad in Ali’s along with the government and political issues.

The pace was perfect, although it’s a little bit slow and boring in the first few Ali’s chapter because it’s mostly politics. But when Ali and Nahri finally met, you’d want to keep reading non stop.

This book has a perfect worldbuilding! Chakraborty mixed moslem history into fantasy and she did fantastic. The Daevabad histories are perfectly connected to the present story, boy I love the histories. I love how there are six Djinn tribes and each of them has their own characteristic and abilities. Everything are incredibly detailed, you could instantly imagine the city’s grand architecture just from the description, every tribe’s characteristics like skin color, eye color, even every tribe’s outfit and languages also written with such details. You would never feel this much Middle Eastern vibes from a book, guaranteed!

The most frustrating thing about this book is you just couldn’t pick a side, the characters are all in the grey area where no one seems to be right and no one seem to be wrong either, even at some point you’ll think that the tyrant king is actually a wise and great person.

Nahri is a strong female character, despite being the center of the whole story I feel like Nahri’s character lack of uniqueness, but it does leave some space for character development, I hope!

And Dara, oh Dara, my precious Dara. I always attracted with funny and easy going guy like Thorne in TLC and Leo Valdez in HoO, but this time, a moody and sarcastic Daeva with serious self control issues and dark past steal my precious heart!

Ali is a cinnamon roll for sure, he is a perfect example of moslem man and I give Chakraborty a standing applause for writing this kind of character.

This book is a must read, especially if you love middle eastern vibes, fantastic worldbuilding, mythology, magical creatures, djinn, and a super complex and tangled story that make you flipping pages like a mad man.

8 thoughts on “The City of Brass”